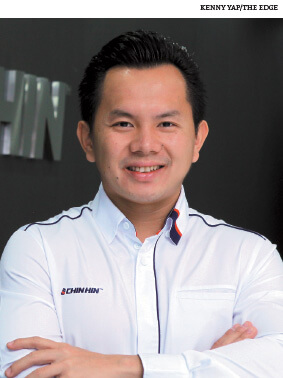 BOON Koon Group Bhd, a Penang-based manufacturer of rebuilt commercial vehicles that has been in the red for the past five consecutive financial years, finally has something to cheer about.

Following the emergence of Datuk Seri Chiau Beng Teik as Boon Koon’s substantial shareholder in April this year, minority shareholders may now count on him to turn the company around. This can be seen in Boon Koon’s share price, which has quadrupled to 45 sen year to date, giving it a market capitalisation of RM124.5 million.

It is noteworthy that the 55-year-old Beng Teik is the founder and deputy executive chairman of Chin Hin Group Bhd, a home-grown building material specialist that debuted on Bursa Malaysia last year.

According to Boon Koon non-executive director Chiau Haw Choon, the turnaround plan for the group is simple — stop the bleeding of its existing business, and then diversify into property development by teaming up with Aera Property.

Already, Haw Choon and his team have taken some cost rationalisation measures to revive the loss-making rebuilt vehicle manufacturing business.

Few may know that Boon Koon has the most number of approved permits (APs) for imports of rebuilt commercial vehicle.

“We intend to turn around Boon Koon in the financial year ending March 31, 2018 (FY2018), by diversifying into property development,” he tells The Edge.

Haw Choon is Beng Teik’s eldest son, and managing director of Chin Hin. At 33, he is believed to be the youngest head of a locally listed company.

To recap, Beng Teik surfaced as a substantial shareholder in Boon Koon with a 20.02% direct stake from the group’s founder Datuk Goh Boon Koon on April 19. He went on to raise his holding to 24.18% on May 29.

Meanwhile, Goh remains as a substantial shareholder with an 8.56% direct stake.

“We see the fundamental and net tangible assets of Boon Koon. We know the owner, so it’s a friendly transaction. They know that we have the execution ability and we could bring value to Boon Koon. It is a win-win [situation] for everyone,” says Haw Choon.

Yeo, who has more than 27 years of experience in the property development industry and had a stint in Malaysia Land Properties Sdn Bhd, is currently the managing director of Aera Property.

Haw Choon says, going forward, the father-and-son team will play an advisory role and set the strategic direction for Boon Koon, while Yeo will spearhead the property business.

“Our priority now is to rescue Boon Koon. We are not coming in to take advantage of the company. In fact, you will see a significant decline in directors’ fees because my father and I will not draw any salary,” he adds.

Between FY2013 and FY2017, Boon Koon registered accumulated losses of RM14.19 million, mainly attributed to the provision for bad debt, write-down in the value of inventories, impairment loss on receivables and underperformance of an associate company.

To stop the bleeding, certain cost-cutting measures have been implemented while the group will continue to improve its sales, says Haw Choon. “We are doing a few things concurrently. The low-hanging fruit is to reduce the unnecessary expenses and allowances.”

Another boost for Boon Koon will come from shared profits from certain property projects with Aera Property, which has developments with a total gross development value (GDV) of RM1 billion in the pipeline.

“This is a very safe project because we have achieved a 70% take-up rate. But instead of pocketing everything, we (Aera Property) have decided to have a joint venture with Boon Koon to share our profits. We are actually being very generous,” says Haw Choon.

Last Thursday, Boon Koon announced to Bursa Malaysia that it plans to pay Aera Property’s subsidiary an upfront participation fee of RM20 million in return for 60% of the gross development profits — estimated at RM93.5 million — of Aera Service Residence.

A back-of-the-envelope calculation shows that Boon Koon is expected to enjoy a profit before tax of about RM56 million out of the RM93.5 million, and is set to realise an actual profit of RM36 million in the next three years after netting off the upfront fees.

The proposal is subject to approval from Boon Koon’s shareholders at an extraordinary general meeting to be held at a later date. Beng Teik, Haw Choon and Yeo, who are deemed “interested parties”, are not allowed to vote at the meeting.

Next, Aera Property is mulling over a similar tie-up with Boon Koon for its upcoming mixed-use development in Sri Petaling. Named 8 & Stellar, it carries a GDV of RM420 million and is set to be launched in the last quarter of the year.

Also in the pipeline is a serviced apartment project in Seri Kembangan with a GDV of RM300 million.

Currently, Aera Property is already partnering Kedah-based Eupe Corp Bhd to undertake a RM570 million freehold condominium project — Novum @ Bangsar South — which has recorded a take-up rate of 90% since its launch about a year ago.

When asked why not Chin Hin diversifying into property development, Haw Choon says it is “very important” to let the market continue to perceive the company as a building materials specialist in both the upstream and downstream segments.

“Today, if we use Chin Hin to venture into property [development], we would be neither here nor there. We are not as good as Eco World [Development Group Bhd], and not as small as some of the players. The market will somehow give a discount to Chin Hin’s shares. Therefore, we thought Boon Koon would be a better option than Chin Hin,” he explains.

While Boon Koon is expected to see significant profit contribution from its property business, Haw Choon stresses that the group is still keen on rescuing its existing business.

It is learnt that Boon Koon is a pioneer in the industry with one-third of the APs for the import of rebuilt trucks, hence giving it an advantage over its industry peers.

Haw Choon says, “If the truck business can still bring value to us, we might continue to invest. It is not that we intend to slowly cease the operations. If that business can bring us recurring income, then why not [keep it]?”

It is worth noting that Boon Koon owns two parcels in Tebrau, Johor, which were acquired some 10 years ago. According to its 2016 annual report, the parcels had a combined value of about RM7 million as at March 31 last year.

“We will study whether the land is feasible for property development. We have the option to either develop it with an industrial factory or sell the land,” says Haw Choon.